Posted on October 9, 2020 by BridgewaterPrep

As part of Black History Month, Prep III have been studying the life of Mary Seacole.  For those who don’t know, Mary was born in Kingston, Jamaica in 1805. Her father was a Scottish soldier and Mary’s mother specialised in Jamaican medicine so she grew up watching her mother caring for the sick in a boarding house where she cared for invalid soldiers and their wives.  In September 1854, Mary heard about the Crimean War and she was struck with the thought of looking after the troops she had known in Jamaica. She travelled to the Crimea and set up her own business, the British Hotel, which was a general store and also a place where soldiers could come to be nursed. She also rode out to the battlefield to nurse soldiers and would perform operations. She was affectionately known by the troops as Mother Seacole, because of the care she gave them. After returning to London after the war Mary wrote her autobiography The Wonderful Adventures of Mrs Seacole in Many Lands, which was published in 1857 and is still in print today. She continued to practice as a ‘doctress’ in London and when visiting Jamaica. She died in 1881 and was buried in the Catholic Cemetery at Kensal Rise.

To celebrate Mary Seacole, Prep III completed portraits of her. 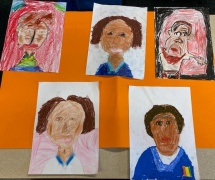