In The Footsteps Of Giants!

Posted on February 9, 2020 by BridgewaterPrep 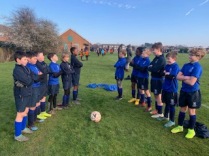 Last month, the Bridgewater U16 team won the National 6-a-side football competition, an undoubtedly fantastic achievement. With this as an inspiration for the Prep U11 squad, two teams set off on Friday to the north-east coast to participate in the ISA Northern 5-a-side football tournament. The competition has been held at St James School in Grimsby for the last 17 years and this was Bridgewater’s first foray into the competition. The event is the first step on the ladder to reaching the National Final in May, with the top four schools qualifying. With 16 schools entering, there was a total of 24 teams competing for the Northern title and reaching the last four was going to take resilience, passion and determination to battle through the group stages.

Bridgewater entered an A and a B team, with both teams having strengths and hoping to go far in the competition. The A team started off with a brilliant move in the opening seconds that saw Craig strike the post when it looked easier to score. Bridgewater dominated the game against Queen Ethelburga’s B, but in the end a solitary goal from Craig was enough to secure a 1-0 win. In game two, the match followed a similar pattern, with Bridgewater controlling possession but struggling to score on a difficult pitch and a stubborn Abbey Gate defence. Matteo went close early on and moments later fired in a sweet shot from distance to put Bridgewater ahead. Once again chances came and went for the team with Craig and Josh having opportunities to win the game. However, with the last kick of the game, Abbey Gate cleared a Bridgewater corner and a powerful drive from the striker flew past Luca in goal. A 1-1 draw felt like a defeat, but the team had no time to wallow as the next game up was The Grange B team.

Immediately from the kick off Bridgewater struck as Craig found the bottom of the net from close range. Luca in goal was protected admirably by Harper and Matteo, leaving Josh and Craig to benefit up front. Josh added two more before Luca B went close twice in a minute. The game finished 3-0 to Bridgewater and next up were the unbeaten Hale Prep. The game was to be a pivotal one as a defeat would leave qualification on a knife edge. Unfortunately, a momentary hesitation from Luca in goal led to Hale taking a 1-0 lead at half time. Bridgewater pressed for an equaliser throughout the second half but could not find a way past the opposition defence. Matteo hit a thunder bolt that crashed off the bar late on but the game ended in a 1-0 win to Hale.

In the final game of the group stage, the team knew that only a win and a win by a large margin would put Bridgewater back in the hunt. To their credit, the team were incredible in their pursuit of goals. Josh scores a delightful solo goal following a jinking run, but Craig stole the show with an amazing five goals! A 6-0 win meant Bridgewater could do more but hope for results to go their way…. and that is exactly what happened. In the last game of the group, Queen Ethelburga’s B shocked group leaders with a 1-0 win to put them through and leave Bridgewater as group winners.

Meanwhile, it is over to Coach Jessica to tell the tale of the B team fortunes. In the first match, Bridgewater beat Argdale with a 1-0 win. The last minute goal was from Jaydon which built from a great run from David and a header from Regan. The boys’ confidence was boosted by their first win in the tournament.

In the second match against Cundall Manor things didn’t get off to a great start with George having to make some great saves to keep the team in the game. A half time switch led to Jackson coming on to save the day with a great goal to win the game 1-0, another assist from David!

In the third game against hosts St James School, spirits were high for the B team and they attacked the game with confidence. Regan scored his first goal of the tournament within a minute of the match beginning, followed by two more from David before half time! In the second half the boys sat back to make for a more even game for the hosts. However, with George’s goal keeping skills and another great goal from David the boys won the game 4-0!

The fourth game against Hipperholme was an important one, as we needed a win or a draw in order to secure a place in the quarter finals. The boys worked hard once again, however goal keeping skills from both sides and some great defensive work from Thomas at the back, meant the game finished 0-0 at full time. However, the draw was all we needed and win, lose or draw in the last game… we were through!

The final game saw Bridgewater B face their strongest opponents yet, The Grange A. The game got off to an even start until one of The Grange boys went down in a tackle. Two of our boys showed great sportsmanship as they went over to see if their opponent was not hurt. However, the referee did not stop the game and this left Bridgewater two players down and The Grange took advantage to score. The boys continued to show great determination to look for an equaliser, but it was not to be and The Grange scored again ending the game 2-0. Although the boys were disheartened at their first loss all day, they were still through to the quarter finals where they would face a team very close to home… Bridgewater A!

With 24 teams now down to 8, the quarterfinals beckoned, and Bridgewater A found themselves up against Bridgewater B. The upside of the draw was that Bridgewater would have a representative in the semi-finals and by doing so, also the National Finals in May! The respective coaches of both teams – Mr Altdorf and Miss Altdorf shook hands before the game and wished both teams the best of luck. The A team dominated the first half and a headed goal from Harper and another from Craig put them 2-0 up at half time. However, the B team were not going out without a fight and they bossed the second half. Jaydon scored a lovely goal to reduce the arrears, before Regan forced a fantastic save out of Luca.  The game finished 2-1 to the A team and the B team sunk to their knees and tears flowed. However, they should feel very proud of their performance and they have all put themselves, along with the returning Alfie, in line for selection in May.

The A team went into the semi-final with extra determination to do it for themselves and the B team. Their opponents were the unbeaten Lady Barn Prep, who had brushed aside all challenges in their group. A physically bigger side, with strong and quick players, Lady Barn forced Bridgewater back and took a deserved 1-0 lead at half time. A quick team talk and a tactical re-shuffle and the team went out in the second half to throw the “kitchen sink” at Lady Barn. Harper was left on solo defensive duties as Matteo pushed into midfield to add depth to the attacks. The pressing game worked brilliantly as Josh was played through to deftly level the tie at 1-1. Moments later, Josh robbed the opposition centre – back on the halfway line to race through a fire the ball into the roof of the net. Lady Barn were stunned and never really recovered, leaving Bridgewater to hold out for a fabulous 2-1 win and a place in the ISA Final.

In the final, the holders of the title and the only team with a 100% winning record lay in wait … The Grange School. The game was never a classic, with both teams cancelling each other out in defence and midfield. Neither side created any real opportunities in the entire game and it came down to two half chances, one taken and one not. Early in the second half, a Grange player found a rare moment of time to deliver a cross to the far post that was bundled over the line by the striker. Bridgewater had one chance to force extra time when Craig was put in on goal, but went with the wrong foot and the keeper smothered the ball to safety. The final blast of the whistle went to the delight of The Grange and the despair of both Bridgewater teams. However, the boys can be extremely proud of their achievement and can look forward to competing in the National Final in May. It was a long nine hour day of travel and football, but it was definitely worth it. From the evidence of the singing on the bus on the return journey, the Bridgewater Choir is also one worth seeing in the near future. Well done team!