Posted on October 9, 2019 by BridgewaterPrep 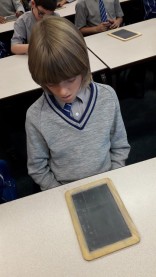 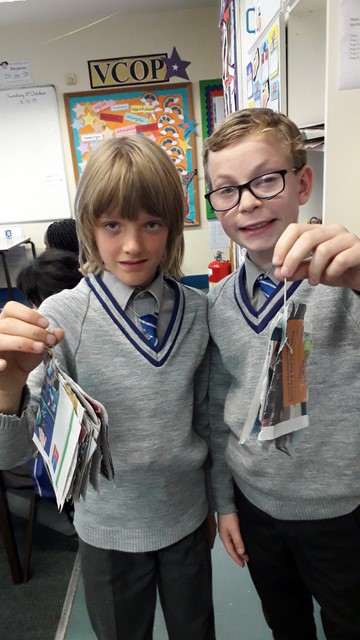 Prep V stepped back in time on Tuesday when Del Bannister visited and taught us about home and school life in Victorian times.

The school bell rang and we started the day with the register (surnames only, of course) and a polite reply of “Yes Ma’am!” as each pupil stood up smartly in response to their name. This was followed by a handkerchief inspection and all our hands were checked; a few of our number failed to pass the hand inspection, probably because they had been up early before school bringing in the coal for the fire… at least, that was Jackson’s story!

Lessons began, and we learned the importance of the three “r”s: reading, writing and arithmetic. Learning was done by repetition and there were harsh punishments for inattentive students; Josh experienced the finger-stocks for fiddling in class, and we all winced when we heard the swish of the cane. We used slates and scratchers to calculate sums in pounds, shillings and pence – some of us found farthings, which were worth a quarter of a penny, a little tricky. Next it was time to use dip pens to practise our Victorian copperplate handwriting, and we found it very difficult not to blot our copybooks! Finally, the bell was rung by Sebastian with great enthusiasm, to signal the end of morning school and we returned to the twenty-first century, reflecting that our modern classroom with its carpet, colourful displays, interactive whiteboard and light, airy windows is very different from the crowded, dark and rather gloomy classrooms in the photographs we studied.

In the afternoon, we found out about home-life for Victorian families, many of whom lived in two up two down terraced houses with a privy in the backyard. (Strangely no-one fancied the job of the night soil-man, who emptied out the privies every few weeks….Perhaps it was the rats that put us off?) Often as many as fourteen people lived in one house, and we learned how to top and tail in bed, and found out which members of the family were allowed to sit round the dinner table. Sorry girls, your place was in the kitchen, cooking and waiting on the men and boys in the family.

We concluded the afternoon by looking at a range of artefacts from everyday Victorian life, and tried to guess their uses. While we all recognised the nutcrackers, the jelly mould, darning mushroom and potato masher proved somewhat more baffling! Finally we embarked on that oh-so-important Victorian activity, making privy paper. Some of us proved especially talented at this and proudly took our efforts home to show our parents; however, Mrs Bannister suggested we stick to our usual softer brand in our own bathrooms!

Many thanks to Mrs Bannister for her expertise and enthusiasm, and thanks also to all our parents for their continued support with the children’s practical learning.