Bridgewater Back On The Beaten Track!

Posted on November 15, 2020 by BridgewaterPrep

At this time of year, we would normally head for the Fylde coast and to Rossall School to compete in the AJIS Northern Cross Country Championships. However, due to current government guidelines all participating schools were instead invited to run a mile around the grounds of their respective schools. Results would then be collated and analysed to rank runners in order based on the times achieved. With the top five runners counting in them individual and team event, we would need a huge effort from all of Prep III-VI. 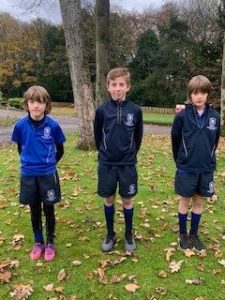 Prep VI were up first on Wednesday and they really led by example with every runner, incredibly, improving on their time from the recent Salford event. The front runners were again Alfie, Luca and Seb, with the latter leading for most of the race before Alfie beat Luca in an exciting sprint finish. With the times of fourth and fifth counting, it was brilliant to see Toby, Harrison and Joshua not too far behind and the U11 boys will have a great chance of moving up the leader board once all schools declare their results next week.

In the U11 girls’ race, Molly and Esme once again led the way and step by step they kept up a terrific pace. Molly pipped Esme to the post to take the individual honours, but it was the results from the supporting cast that were especially pleasing. Miranda finished in third place and improved her time by 37 seconds. However, it was the runners in fourth and fifth that will boost the team’s chances overall. Jasmine improved on her previous best by 1 minute and 23 seconds, whilst Abigail beat her time by 1 minute and 26 seconds! All in all, Prep VI can be extremely proud of their commitment, tenacity, and their levels of endurance.

The Prep V race was another closely fought event, with Alex once more out pacing Anton to take the top spot. Frankie improved by almost a full minute to beat Sam into third, with Blake coming home in fifth position. A special mention must go to Raj, who reduced his time by an amazing 1 minute and 52 seconds!

The U10 girls were under a little pressure as, with only five runners in the race, every runner and every second would count. Maya won the race comfortably from Lucy and Ava in similar times to the previous race in October. However, thanks to the perseverance of Hannah and Elissa in completing the course, we will be able to earn points to qualify for the team event too.

The following day, Prep III and IV took to the playing fields and surrounding areas of the school grounds. It is important to remember that we are very fortunate at Bridgewater to be able to run a course of a mile long and can enter such competitions. Many schools will not be able to participate in the cross-country this year as they do not have the area to run the distance or to do so safely. The boys’ race was won by San, followed by Lucas, Leo, Isaac, and Frankie in the points. All 13 runners completed the run, with Frankie putting in a star performance, improving his time by 48 seconds.  The girls’ race was won again by Amelia, with Darcie, Lottie, Layla, and Ellie all in the important top five placings. Ellie improved her time by exactly 60 seconds, Angel did so too by 57 seconds, whilst Layla lowered her time by 1 minute 13 seconds! 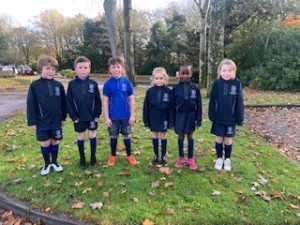 Last but definitely not least, Prep III set off on their race. In the girls’ event, Maia kept pace with the boys to finish in joint first place overall, as well as winning the girls’ race. Isabella and Emily took the podium places, with Isabella and Ruby making up the additional scoring spots. Ying-Wun improved her time by the most and Ella, Lucy, and Layla also all improved on their previous race times. Finally, the boys’ race was as exciting as expected. As many as six runners were in contention to win this intensely fierce competition. In the end, Oscar took the honours, closely followed over the line by Henry, Jensen, Oliver, and Jacob. Daniel improved his time by 46 seconds in a determined run, Mason reduced his time by 22 seconds, whilst Patrick can be delighted with his 1 minute 27 second reduction in his personal best!

Well done to all 70 runners who took part in the event this week and it was especially nice to see so many improving on their times from the Salford Virtual Cross Country competition in October. Of the 28 girls running for the AJIS event, 43% improved on their times, whilst 50% of the boys reduced their times over the two races. We have one more race to run on Wednesday 25th November and Thursday 26th November. This race will be for the honour of becoming the House Champions in Cross Country for 2020. Going into the race the Yellow House are marginally ahead of the Green House. However, with the Blue House having won 3 out of the 8 races, it is still very much all to play for!