Posted on October 15, 2019 by BridgewaterPrep

It is noticeable as the week has progressed that our children are less enthusiastic when it comes to getting up in the morning – for the second morning in a row, every single child has been asleep when they received their wake up call.  Mind you, the same can be said for most of the staff!  The children have been well worked and active since we’ve been here.  It is just as well our children are so active: it was another massive breakfast feast this morning to fuel us for the day ahead.

The final training session at Paterna was the traditional football tournament. Harrison, Harper, Craig, David and Freddie were the elected captains of the mixed teams. Whilst Mrs. Hewitt delivered a masterclass in the art of the cross bar challenge, the teams battled it out for the bragging rights.  Following an intense ninety minute round robin tournament, the final was fought out between David and Harrison’s teams. Despite Alfie and David driving their team on, it was Harrison’s team that emerged victorious with a 3-0 win. Goals from Harrison and two from Josh, left Evie B, Tom, Harrison P and Abigail to celebrate with their team mates. The teams then had the privilege of receiving certificates in the Media Centre from the Valencia coaching staff.

Another sumptuous feast for lunch, and then it was time for great excitement that was the visit to Oceanogràfic.  The centre’s stated aims are, “to provide new knowledge, to work towards animals’ care and well-being of animals, and to inform and raise the awareness of society to improve the conservation of species and their natural habitat.”  What an amazing place!  Not quite sure what to expect, we visited a diverse range of habitats, both inside and out.  Crocodiles basking in the sun, pelicans (“Never heard of them,” much to the consternation of Miss Armstrong – one of her favourite books for Kindergarten is The Giraffe, the Pelly and Me, which everyone should read), mesmerising jellyfish rising and falling in the tank, tanks bursting with fish, sharks, lobsters, cormorants…  And on and on…  What an absolutely amazing place!  David, as he walked through the entrance, was heard to say, “I’m bored, I don’t like fish.”  Forty five seconds later, he exclaimed, upon seeing a model of a dissected shark on display, “OK, I’m not bored anymore.”  Seeing a pair of beluga whales weave and twist their way around their tank was a real privilege – first, watching them from above and then moving to a lower level to see them under the water.  They were stunningly beautiful.   Highlight of the visit – apart from the ice cream shop – was the dolphin show.  Five bottle nosed dolphins enthralled us with their synchronised antics as their trainers took them through their paces around the pool.

And then on to the final action of the tour: our last round of matches for our footballers against teams from the CF Catarroja club.  The girls made their way on to the pitch for the first game of the evening, their heads brimming with the skills they had learnt during our time in Valencia. They meant business, and if it wasn’t for the somewhat mismatched football kits, they’d have looked like it too. They got off to a strong start and held their opposition well, Nyla brought her usual feistiness and Abigail stuck to her opponent like glue, following Mr Altdorf’s advice of, “stick with them and if they go to the toilet, go with them!”  Despite conceding a goal, they kept their heads high and continued to press on. A goal was definitely coming, we could feel it! With Allegra holding the midfield and Ellen fighting through the Spanish defence, it was only a matter of time. Emma was replaced in net by Emily and Evie O’N continued to run her socks off. Another goal for our rivals meant our troop of cheerleaders had to work a bit harder to raise the girls’ spirits. After a half time team talk, they returned to the field with a fresh sense of determination!  Then, it happened! We scored! Holly placed an excellent pass to Allegra who smashed the ball into the back of the net. The girls were elated and the crowd went wild! Jasmine, Evie B and Juliet cane off the bench and were full of energy. Anna donned a pair of goalkeeper gloves and took her position between the sticks. The girls fought hard and played with an amazing amount of new found confidence.  On any other day, Ellen might have had five goals, including a free kick that came back off the bar.  However another goal was conceded moments before the final whistle. Some were disappointed but most took pride and satisfaction in the improvement of their performance, both as a team and individually. Evie O’N said to Mr. Suter after the game, “Do you remember last year?  I was really rubbish.  I think I have really improved this year.”  Beyond measure – and the same can be said for all the girls.  Allegra was named Player of the Match but that’s not to take away from any of the other fourteen girls who played.

Buoyed by the confidence boost of a win on Sunday, the U11 boys were determined to finish the tour in style. Bridgewater got off to a dream start with two early goals to put them in control of the contest. CF Catarroja had no answer to the physicality and the pace of the Bridgewater attacks. With Thomas and Alfie T – putting in a cameo appearance before starring for the U10s later – snuffing out any potential goal threat, the team never looked in danger of losing the game.  Oliver opened the scoring with an alert finish after the goalkeeper spilled a Freddie shot. Minutes later, Alfie was brought down on the right wing after a typical lazy run from the back. Alfie picked himself up to take the free kick and force the keeper to parry the ball into the net. Harrison and David both went close, before Freddie scores a lovely solo goal, breaking challenges on the edge of the box, before curling the ball into the top corner of the net.  With a 3-0 lead at half- time, a reshuffle allowed more playing time for the whole squad. The team continued to create chances and it wasn’t long before another goal was scored. Owen broke up an attack and slipped the ball to the impressive Craig. A great first touch and a sublime through ball found Oliver who cut inside and fired a rocket into the roof of the net. To the credit of the Spanish, they did not give up and two quick goals put them back in the game. Keeper George could do nothing about the goals, neither could Harper or the man of the match, Thomas. With the score suddenly 4-2, both teams went all out for the win. In the end, a lovely move involving Hari, Alfie and Harrison resulted in a tap in at the far post for Toby. What a fabulous experience for the team to play European football under floodlights at one of Europe’s top clubs. Unforgettable… thank you CF Valencia.

Next up were the U10s.  After their easy win earlier in the week, they perhaps expected tonight’s opponents to be just as easy opposition but from the off we found ourselves hassled and harried.  We were not able to impose our normal crisp open passing game the way we wanted to.  With Josh martialling the middle of the pitch, and Alfie mopping up every opposition attack before launching our own attacks from the back, we gradually began to impose ourselves.   Part of the team talk before the game was to remind the boys of how the U17 Valencia players we’d watched the previous day had played, taking a maximum of three touches.  Joshua completely ignored that advice when he started a mazy run from the centre circle, weaving his way through the opposition to slot home for the opener.  He repeated the feat two minutes later, before the third was added via an own goal after Anton whipped in an undefendable cross from the right.  Frankie and Harrison harried the opposition when they were introduced, Dravid got on to the end of a cross and seemed destined to score his second competitive goal of the week, only for the keeper to block it with his legs.  Alexander beat his man out wide and ran on through to coolly slot home to make it 4-0.  Catarroja managed to pull two goals back, both conceded to high shots that perhaps only Mr. Suter might have been able to reach – Kian, despite soaring high, could only watch them whip in over his head.  Normal service was resumed when Joshua completed his second hattrick of the week – and a successive man of the Match award – to make the final score 5-2.  It might have been more, but a light failure meant the match finished earlier.

And so to a late supper, phone time and bed for forty exhausted children after an unforgettable day. 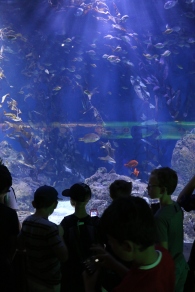 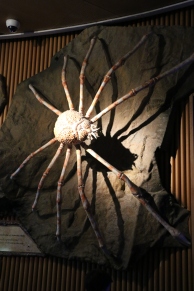 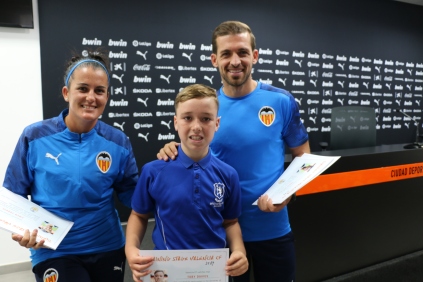 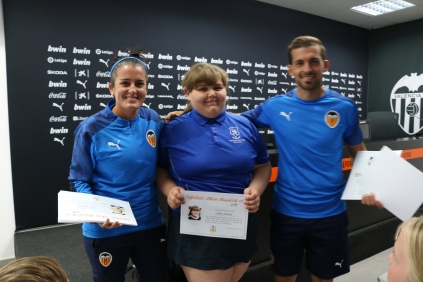 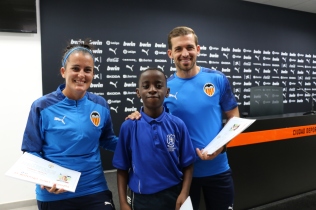 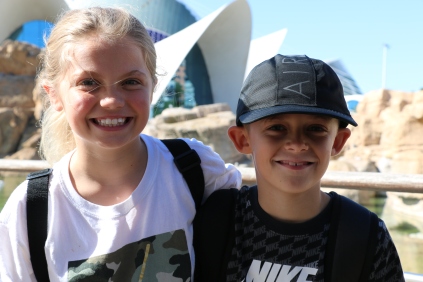 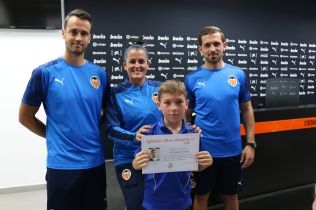