Posted on January 15, 2019 by BridgewaterPrep 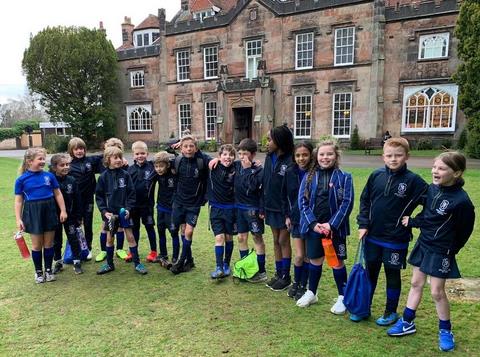 The U9s started the new year in fine style, with a convincing 21-12 victory over a strong Pownall Hall Prep. The same players had lost 5-2 in a football match before Christmas, but the ISA Tag Rugby Champions of 2018/19 were in no mood to lose this game. With the match split into four quarters of 10 minutes each, the half time score of 11-10 gave no hint of the dominance that Bridgewater were to exert in the second half of the game.

Bridgewater began the game showing the attaching flair that they were going to demonstrate throughout the whole of the game. Alfie received the ball from the first pass and dodged and weaved his way past a bemused defence to touch down in the corner. This was to be a move that Alfie was to produce time and time again, often with the same result in the same corner of the pitch. In fact, Alfie was to score a brilliant 10 tries to guide the team into a commanding position and ultimately to win the game.

Despite controlling the game the half time score of 11-10 somewhat flattered the hosts. Attacking wise, Bridgewater were able to score freely, with two tries from the elusive Josh and a hat trick of tries from Luca C giving the team the lead at half time. The contrast in styles was evident and a rule change for the second half to not allow the knock-on played into Bridgewater’s hands beautifully. With Pownall Hall looking to throw the ball around, handling errors occurred as the Bridgewater defence pressured the opposition backwards and into a string of errors.

Meanwhile, the direct running approach of the Bridgewater team proved just too much for the hosts to handle. Josh added another two tries as did Luca C, whilst Toby and Joel ram in their own tries of individual brilliance. Luca B, Jackson, Anton and Sebastian all went close to adding to the score, but there contribution to the defensive work of the team should not be underestimated.

With the U9 netball team losing a thrilling match 13-12, it was a very satisfying afternoon of sport for the Bridgewater youngsters. There are a host of sporting fixtures on the horizon including netball, football and basketball. The next big event that all can get involved in is the final round of the Salford Cross Country League at Buile Hill Park on Saturday 19th January at 9-15am. We hope to see as many of our Prep 111-VI runners as possible at the event this weekend.