Posted on May 7, 2018 by BridgewaterPrep 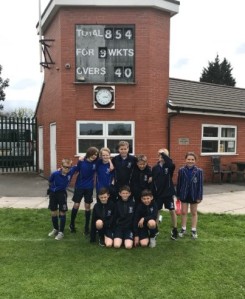 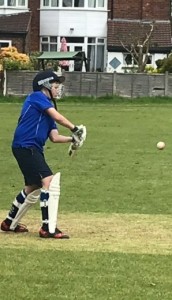 Bridgewater U11s travelled to South West Manchester CC on Friday afternoon to play their first game of cricket this season. St. Bedes were the hosts and were looking for a confidence boosting win to kick start their campaign in the AJIS Cup, a competition that Bridgewater will certainly be entering in future years.

The format for the match was to be pairs cricket. Every pair would bat for a maximum of two overs and also bowl for two overs. Consequently, everyone had an important role to play as a batsman, a bowler and in the field. St. Bedes won the toss and elected to bat first. Each team would start with 200 runs and attempt to build up their score, whilst not losing wickets, as every wicket lost would take 5 runs off the score.

Bridgewater made a dream start and continued to build on this as the innings progressed. St. Bedes lost wickets at regular intervals and scoring shots became a rarity. A couple of well driven fours put them back in the running but with 9 wickets being lost, their final total was 198 for 9, a brilliant performance by Bridgewater with wickets and stumpings galore. Archie took a wicket and three very crucial stumpings to turn the game in Bridgewater’s favour. Thomas took two wickets, with Matteo, Jake, Owen and Ethan also chipping in with the wickets that were to leave St. Bedes needing to bowl and field incredibly well to win the game.

Bridgewater went into bat with a game plan – not to lose wickets and not worry about scoring quickly. The team executed the strategy to perfection and went on to lose only two wickets in the innings. Freya, Thomas, Archie, Lewis, Jake, Owen, Matteo, Harvey and Daniel all batted patiently and with control. However, it was Ethan who secured the victory with a couple of lovely pulls for four late on in the innings.

Bridgewater finished on a very creditable score of 248 for two to give them a 7 wicket and 50 run win over their more experienced opponents. All in all, a brilliant day in the sun and hopefully we can find some more teams to play a the summer progresses. Cricket practice is on a Wednesday after school and there is no substitute for experience. There are several local cricket clubs who generally are keen to attract new talent and we will be looking to get details of their practice nights very soon.