Posted on September 15, 2016 by BridgewaterPrep

After yesterday’s introduction into the joys of Castleton, the children were especially keen to get going with today’s activities.  Imagine Mrs. Seward’s joy to find Dylan had woken up, dressed and packed his bag for the day, and then woken the rest of his roommates to do the same – all by 5am!  After a more leisurely awakening by the others – some not until at least 6am – it was time for a carb-loaded fried breakfast to set us up for the exertions of the day.

After collecting the eggs from the hens – that’s Mrs. Booth’s breakfast sorted for tomorrow – we set off across the fields towards Mam Tor.  It was somewhat surprising to find that had we been standing where we were 300 million years previously, we would have had to be treading water in a warm, creature filled sea.  Luckily we came later as we hadn’t brought our swimming costumes, but we were able to find fossils in the limestone rocks of the field boundary.

We discovered that this area was an important one for lead, and that even the Romans had operated mines in the area – we saw one of their access shafts and viewed a massive rock grinder.  Well done Alfie for knowing it was like a millstone.  Crossing a red river – very unusual – we visited Odin Mine where we learnt that some of the ancient miners had in fact lived in the cave while they mined which, given its wet and mucky nature, didn’t seem a particularly attractive proposition.  Especially when there is a resident dragon – we saw his green dragon’s blood at the entrance on the rocks.  There were no volunteers to stay and provide his next meal.

Climbing on, with Mam Tor soaring above us, we had lunch on the world’s most under-utilised road – which was just as well as it was slowly sliding down the hillside (not while we were sitting on it, we hasten to add!).  Some bright Victorian engineer had thought it was a good idea to build where he did, not recognising that the underlying rock was shale.  Not particularly stable, as we were easily able to snap it in two with our bare hands.

From there, we continued to Treak Cliff Cavern where we descended (or so we thought – more later) into the hillside to see where the unique gem Blue John is mined.  Seemingly the original gem is blue and yellow – the first pieces mined were taken to France for fashioning into decorative pieces where they were called Bleu Jaune – hence Blue John.  Enjoying the chilly caves after the heat of the day, we learned that a stalactite grows at about a centimetre every six hundred years.  We’ve promised to revisit when the cave’s showpiece The Stork – a stalactite approximately 130,000 years old – is due to meet up with the stalagmite reaching up from the floor – in about another 1000 years!  Our guide did tell us to give it a couple of years extra just to be sure!

A weary walk back to the hostel for most (Mrs. Seward took a short cut – look at the picture of her in the paraglider) was followed by refreshing showers (it’s been a boiling hot day) and dinner.  As this is being typed, the children are panning for gems (not sure if they’re going to find any Blue John) and then shortly will be going out orienteering, before retiring to bed.  If they don’t sleep tonight, there’s no hope… 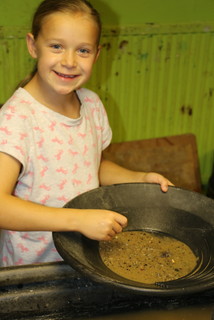 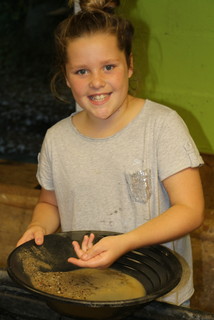 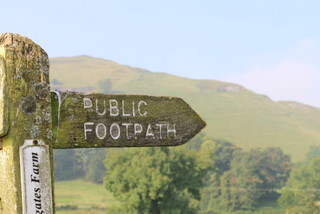 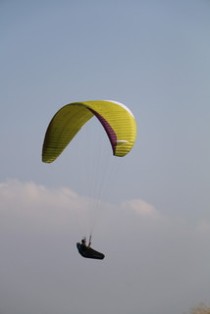 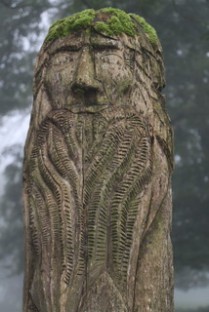 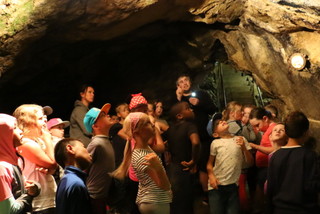