Posted on July 7, 2016 by BridgewaterPrep 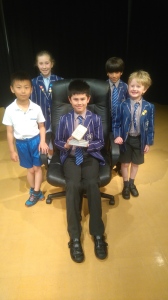 Still no Magnus Magnusson, but instead the inimitable Mr. Grant presided over this year’s Times Tables Mastermind.  Three contestants from each class chose a specialist table, and were then tested on a random selection of all the tables.  Sounds easy, but to do it at pace, with Mr. Grant asking the questions and the rest of Prep watching is certainly a challenge.  Well done to all our contestants, not just the winners, for doing so well.  Mrs. Davies, who organised the competition, revealed that there were very few points between all taking part.

Blue house were the overall winners, with Harvey, Stanley, Ahmed, Alfie and Milan winning their year groups.  Special mention went to Vyomi in Prep VI who, despite not winning, has been in every final since she was in Prep III.