Bridgewater Scrum Down in Liverpool

Posted on November 18, 2019 by BridgewaterPrep 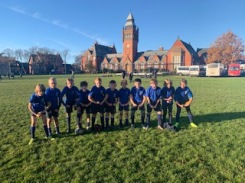 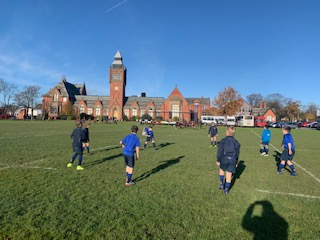 The U10 rugby team had its first taste of full contact rugby today as they competed in the AJIS Northern Tournament at Merchant Taylor School, Crosby. It was a real baptism of fire for the fledgling rugby players as they were placed in a group with traditional rugby playing schools, AKS Lytham, Scarisbrick and St Mary’s, Liverpool. Inspired by the Rugby World Cup in Japan and the recent Bridgewater Tag Rugby competition, the boys went into the event with excitement and a little trepidation. With three games of twenty minutes each to negotiate it was going to be a real test of skill, stamina and steel.

First up for Bridgewater was Scarisbrick School and it was soon clear that the game was different to the tag game that they enjoy so much. The running side of the game was always going to go well, with the likes of Alfie, Luca C, Luca B and Josh having the speed and agility to cause any defence a problem. However, rucks, scrums and line outs were not put to the test for the first time in competitive circumstances, as with under 8s in the teams, this was not permitted. Fortunately, we have some very fast learners in the squad and the team after a slow start, began to grow into the game. Scarisbrick matched Bridgewater for the first two tries before the running power of Alfie, Jackson and Toby took over. Bridgewater ran out 30-10 winners with tries from Alfie (3), Toby and Josh celebrated his birthday with two lovely darting runs to score.

In the second game, Bridgewater had to stay on to play against AKS Lytham. The boys looked tired early on and once again the opposition raced into a ten-point lead. This team has a strong desire to win as well as a great attitude to the game, however, and Bridgewater roared back into the match. Luca C scored first, followed by tries from Toby (2), Alfie (3), Jackson and Josh. A 40-10 win for Bridgewater emphasised how strong in attack and in defence the team were performing.

In the final game, Bridgewater took on St Mary’s, Liverpool. The break seemed to work against the boys, who looked tired and lethargic as they fell behind to two tries. It would have been more but for some terrific tacking from Luca C, whilst Luca B and Josh also put in regular tackles. Jackson was a constant threat going forward, as were Alfie and Tommy Jack. Anton, Seb, Joel and Kian all made an impact in the game, but it was tries from Luca B, Toby and another four from the unstoppable Alfie that won the game. A 30-10 win was enough to give Bridgewater the win to end the tournament as Group C winners and earn the respect and admiration of some of the top rugby playing schools in the region.

Next up in a busy week of sport is an U11 football and netball match away to Cransley Prep tomorrow, before the U9 ISA North Tag Rugby Tournament on Wednesday.