Posted on September 12, 2018 by BridgewaterPrep

Prep 6 set off to Anglesey in North Wales this morning, full of excitement and a little trepidation. Mr Grant soothed the nerves with a box set of Wallace and Gromit  on DVD, whilst coach driver Chris completed the job with a collection of hits from the 195os! 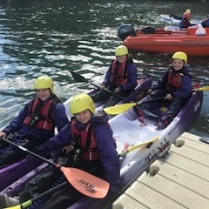 On arrival, the group ate a quick picnic lunch in the stunning gardens of the Lord Anglesey estate,before being split into 3 groups for the afternoon activities. Mr Grant took the first group off to experience the thrills of Via Ferrati. This is an interesting introduction to rock climbing by using iron cables. Lucia and Gabriella were exceptional on the challenging course on the rock face, but all completed the climb with increasing skill and confidence

Mrs Hadgianni took another group off to learn the art of bush craft and how to light fires cave man style. Dina and Eva were impressive fire starters and everybody went onto make bread and jam that Warburtons would have been proud of.

Meanwhile, six went down to the shores of the Menai Straits to have a go at the two man kayaks. Oliver and Freya took to it like ducks to water and Jasmine and Florence found going in circles much easier than a straight line! Owen and Freddie ploughed into anything in their way but everyone eventually got the hang of kayaking. Freya was the first to jump off her kayak into the sea as a challenge and all followed suit soon after…well nearly all! A variety of paddle skills and games ensued before returning to shore and a hot shower.

A well earned tea awaited our noble adventurers before moving onto the evening session…. The Great Egg Drop. A quick scramble around for materials, some hard boiled thinking, a few fried minds and after a while, some cracking ideas were cooked up. One group tried to poach another’s idea whilst another had more than one plan as they did not want to put all their eggs in one basket! All yoking aside, prep 6 can be proud of how well they took to the task and worked cooperatively and harmoniously to hatch a plan to win the challenge.

Who would win the final contest  of the day… Team Nelson, Team Wellington or Team Marlborough.  Each invention was dropped from 20 feet and the team whose egg did not break would be declared the winner. Jess, Eva, Dina, Leah ,Daniel, Niamh and Dean for Team Marlborough rounded off an enthralling competition with an eggceptional creation!

Day one a resounding success, everybody went to bed to prepare for another day on the beautiful Welsh coast.