Bridgewater a hit with rounders 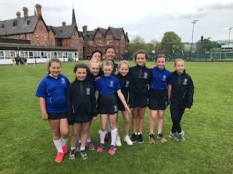 It has been a fabulous couple of weeks for the Bridgewater U11 rounders team. The season began two weeks ago with an opening friendly against St Bedes, Manchester. The hosts provided two strong mixed A and B teams, with lots of experience in the ISA version of the game.

It was a great opportunity to iron out some batting flaws and to practice fielding positions. The first game resulted in a 15-7 win for St Bedes who took advantage of too many fielding errors. There were moments of inspiration from Grace and Wini with some fine catches, whilst only Isabella really looked threatening with the bat.

In game 2, Bridgewater batted and fielded much better all round. Once again, Isabella shone with the bat, but this time everyone chipped in with the scoring. Star, Grace, Dalia, Freya, Jess and Ellen all scored full rounders. In the field, the trio of bowler (Lily), backstop (Isabella) and second base (Ellen) were all in tune with each other and restricted the opposition scoring as freely. The 17-11 win for St Bedes was far more hard fought and the confidence the team gained from the match was visible to see.

The following week the team headed to Stretford Grammar for a festival against Stretford Grammar, Clarendon Cottage and Worthington School.  The best of the tournament was not just seeing the team beat all challenges, but how much they had learned from the previous week. Star moved to second base and Ellen into the deep to cover the outfield and fourth base. Ellen took a couple of great catches and her speed ensured the vital fourth base was covered more often than not.

Lily bowled with consistency and Isabella was calm and collected at back stop. Meanwhile, the most improved performance came from Star who was a revelation at second base. In each of the games, the fielding was excellent as the opposition struggled to score even half rounders. The batting performance also was markedly improved, with the girls recognising the importance of getting to second base at often as possible.  Star used her left handed batting intelligently, Isabella scored regularly and Ellen found her form with some powerful hitting. Again all the girls chipped in with half and full rounders in each of the games and Bridgewater went on to take first place in the Festival. Bridgewater beat Worthington 10-2, Clarendon Cottage 7-4 and best of all best the Stretford Grammar Year 7 team 9-3.

The team entered the final week of the term with back to back fixtures on Wednesday against Pownall Hall and local rivals Branwood Prep. With Mr Rooney at the helm in the first game, the girls were eager to impress and went onto a convincing win over their Cheshire opponents. The girls made it 5 wins in a row with an impressive 39-31 win over Branwood Prep. The AJIS scoring version was in play for the game, with bonus points scored for each base reached after first. Once again the development of the team was clear to see and they can go into the half term break looking forward to competing in both the AJIS and ISA tournaments in June.

1 Response to Bridgewater a hit with rounders