King Redwald Rises from the Dead in Prep III

In Prep III we have we have been continuing our history study of Invaders and Settlers by finding out about the Anglo Saxons. One important source of evidence is Saxon graves, which were filled with objects they believed would be needed in the afterlife.

In 1939, one of the most exciting Saxon graves was discovered by archaeologists at Sutton Hoo in Suffolk, following reports that local people had seen ghostly Saxon warriors. Among the many artefacts dug up was a helmet. Experts carefully pieced it together, and many believed it had belonged to King Redwald who died in the year 625. It was made from iron and copper, and contained four thousand garnet stones. It is a haunting and eerie piece of history.

Having looked closely at the helmet, we have tried to make our own, with a red-eyed snake stretching down the front, golden eyebrows, a toothbrush moustache and cheek flaps. As you can see from the pictures, we look just as scary as the Great King Redwald at the head of a Saxon army… 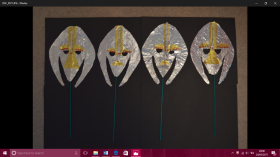 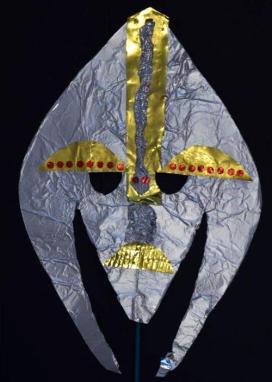 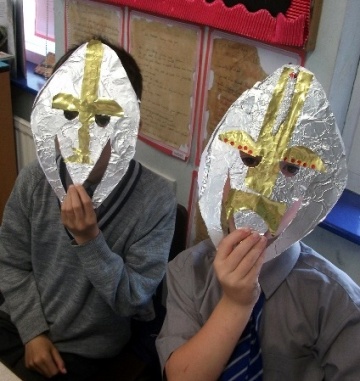 If you visit London, visit the British Museum to see the helmet and all the other Sutton Hoo treasure….

In Literacy, we imagined the stories the helmet could tell. Here are some extracts from our poems:

If this rusted ancient bronze helmet could speak, it would tell stories of…

Huge wooden ships which followed the stars, sun and moon and sailed from Germany. Thomas

Of minstrels who sang merrily with a lyre and skipped along telling stories of Saxon victories. Thea

And a mysterious king who led all the troops. Mattheo