Final Fling for Fabulous U11 Runners

Posted on January 21, 2020 by BridgewaterPrep 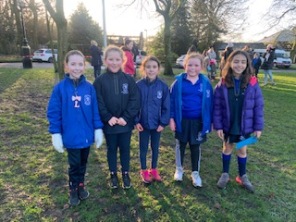 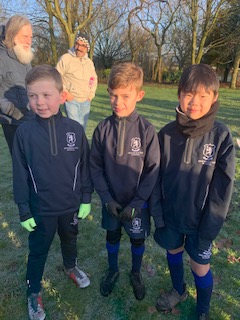 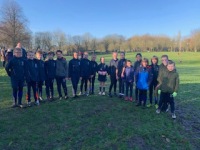 On a beautiful Saturday morning at Buile Hill Park, Salford, the final round of the Salford Cross Country League season took place. It was also the last chance for our U11 children to participate in this wonderful event, that has brought so many together in recent years.

Four of our runners have been running for Bridgewater in every race over the last four years, showing an admirable sense of loyalty, commitment and determination. Thomas has had an epic X Factor type journey since his first race in Prep IV and it culminated in his best performance today, with a brilliant 11th place! His sister Evie, along with Anya and Yasmeen have also shown similar dedication over the past three seasons and can be extremely proud of this achievement. Once more the girls ran their hearts out and crossed the line for the last time with Anya (24) setting a personal best, closet followed by Yasmeen (25) and Evie (41).

Despite not collecting her ticket at the end, Darcy came home in 34th, just ahead of sisters Mia (37) and Chloe (50). A special mention must go to Alia (90), who has run in all three races this season and has found it tough going but never once gave up. The girls’ team was completed with two great runs from twins Mia and Chloe and from Prep V, Abigail, who finished in her best placing of the year.

In the U9 girls’ race, Ada added to her brilliant performance at Bolton Road, with another amazing run, finishing in 12th place. Lucy (55) and Maya (42) ensured they picked up an award for finishing all three races this season, with Maya doing so for the second year in a row! Well done also to Hannah who, despite finding it hard going in the first run last time out, returned to produce another determined run. The team was joined this time out by Ava, who despite having a morning of dance to go to, still turned up and ran very well to finish in 64th spot.

There was another first-time runner in the U9 boys’ race. Anton in Prep IV ran brilliantly to collect a certificate for a Top 20 placing as he romped home in 19th place. He then dashed off to play in a football match that kicked off 45 minutes later. Superb effort Anton! It was great to see San running for the first time too and be can be very proud of his run as he crossed the line with a smile, and he will be back next year without a doubt. Jenson ran for the third time in the series, a terrific achievement as he has run against boys at least a year older than him in each race. However, we had an even younger competitor in the race, as Andrew from Prep 1 was brave enough to run against much older boys. Having seen sister Abigail run in the last race and today, he was clearly inspired to compete. This is one of the most pleasing aspects of the Salford Cross Country League, as we have many brothers and sisters competing and it really is a great family occasion, with wonderful parental support for all the runners.

In the final race of the series, the team went into the event with real hopes of a podium finish. Following on from the amazing performance at Bolton Road, four of our runners broke into the Top 20 once more. Thomas achieved his best run with an 11th place, Tobias was close on his heels in 17th whilst Regan took 19th spot. Moaed again ran brilliantly to finish in 25th, with Seb not far behind in 31st. Kian continued his progress in the event with a 41st place, as did Harrison (48) and Chun Ka (62).

However, the performance of the day went to Luca who became the first Bridgewater runner to breach the Top 10, as he raced home in 9th place. Two years ago, Luca achieved a bronze medal in the League, but this year he topped that with an incredible silver medal based on all three runs in the series.

Furthermore, the U11 boys were rewarded for their hard work and commitment, as well as their tenacity and fitness, by claiming a silver medal in the team event. An unbelievable result for the team in such a tough competition and one that they should be extremely proud of!

On Wednesday, all our runners are invited to run for Bridgewater in the ISA Cross Country Championships at Scarisbrick Hall. We wish them well individually and collectively in the event and I am sure the Salford experiences will be more than useful to our competitors. Thank you to all the runners who have given up their Saturday mornings and to their families too for their unwavering and much appreciated support. A Salford Cross Country without an O’Neill runner will certainly be a new one for me next year! It has been brilliant to see so many turning out to run and hopefully we can continue to add to those competing next year.