Posted on September 11, 2019 by BridgewaterPrep 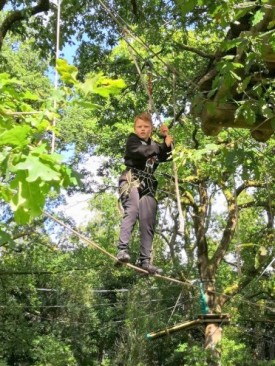 Prep V set off from Bridgewater this morning, with even the rain not able to dampen the spirits of twenty excited youngsters. The journey to Windermere in the heart of the Lake District passed quickly and as we crossed into the Cumbrian border, the rain stopped and the sun came out. Well done Mrs Sweeney for such incredible planning!

The silver mini bus pulled into the car park at Brockholes Adventure Centre, moments before the blue bus, ensuring the silver bus took the driving honours for the second year in a row.  After a quick stretch of the legs we were harnessed up, de- briefed and led up the gantry and into the trees. Staff had to go first to test the course and be strategically placed around the 16 challenges… and what fabulous challenges they were! Skateboards, tight ropes, leaps of faith, pulleys, climbing nets, walking the planks and zip lines awaited our high flyers. Luca B flew across the trees like Tarzan himself and even went back to guide Nathan over the tight rope. Esme lived up to her family moniker of the little monkey as she swung from branch to branch effortlessly. Molly, Jasmine and Abigail remarkably did not scream once during the climb, whilst Chloe and Evie calmly passed each stage comfortably and Miranda and Kayleigh smiled with relief each time they reached the next platform. In fact, everybody can claim their first Bridgewater Lions award for their tenacity, courage and sense of community.

To complete the morning, everyone was rewarded with a breath-taking ride down the zip wire. High above the tree top trek, one by one, Prep V zoomed across the country park. Esme hung upside down, Dexter went with no hands, Toby went backwards, Joel twisted and turned, whilst Josh, Alfie and Toby went for the pure exhilarating adrenaline rush of speed.

We still had not finished with Brockholes Visitor Centre, as we had performed so well in the trees, that we had plenty of time to make full use of the adventure playground. Slides, pirate ships, climbing frames, stepping stones and a most welcome lunch provided plenty of entertainment of respite for staff and children alike. A trip to the souvenir shop created a fresh rush of excitement that caused a momentary loss of perspective…. we almost missed the boat trip! A mad dash to the pier eased the fears, until it was pointed out that the boat was moored at the other jetty. Fortunately, Prep V have been well trained in PE lessons and were able to pick up the pace and sprint across to catch the boat and hold it up whilst the older members of the crew caught up.

All aboard, we took our seats on the top deck to make the most of the fabulous views from all angles of the lake. There was even time for a hair school to be set up as the girls took it in turns to plait, braid and re-place pig-tails. If anyone needs an Indian head massage than Abigail is an absolute genius, as Jasmine will certainly testify. There cannot be more beautiful and spectacular places to visit than Ambleside and Windermere, and a cruise around the lake conjures up memories of “Swallows and Amazons”.

Off the boat and back on the bus for a roller coaster of a ride, up and down a winding road and we arrived at our home for the next two nights. Windermere Youth Hostel has incredible views over the hills and lakes of Cumbria, but more importantly, rooms had plug sockets… well nearly all. After a tea of lasagne, jacket potatoes and sponge puddings ( a strange combination?!), we all settled down to a variety of good old fashioned games. Harrison astounded all with his eye spy prowess, Seb beat Nathan at chess, Dexter beat Harrison at chess, whilst Molly and Jasmine fleeced Mrs Sweeney at snap. Jackson and Luca C had a good go at the quiz and Toby and Alfie woke the hostel up with a game of Jenga. After much deliberation, Mrs Gill announced that Batman and Robin had won the quiz, but the identity of the general knowledge genius and his helper remained a mystery.

With bed time mercifully closing in, the group retired to their rooms. Some showered, others searched for PJ’s and hair brushes (not Mr Altdorf). Joel eventually realised his missing toothpaste was in his hand all along. Jackson was seen to be doing a strange jig across the corridor and Alfie finally got the answer to his question … yes there are fish in that lake! It has been an action packed day and tomorrow promises to be just as lively. All that remains to be said is goodnight from me and goodnight from Prep V. 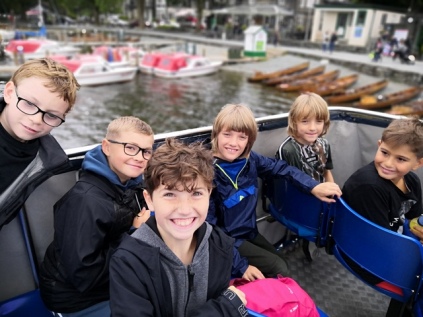 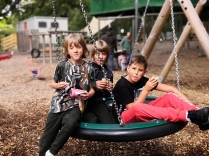