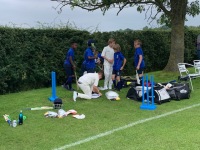 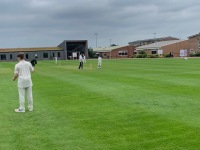 The U11 Pairs Cricket team proudly set off to Chester today, to take on the pre-tournament favourites in the AJIS Cricket Final at The King’s School, Chester. The hosts had already beaten Hulme Grammar and St Bedes to reach the final and were packed full of county and club players. Bridgewater were playing in their first cricket hard ball final and are in the early stages of their cricketing development.

The King’s School were put into bat and despite some excellent fielding and bowling, were rarely troubled throughout the innings. Jaydon and Matteo bowled economically, as did Thomas, whilst Luca was the pick of the fielders. Matteo, Oliver and Craig had half chances to take catches during the innings, but the only wicket came with the very last bowl, as Oliver and Alfie combined for a run out. The Kings School finished on 274 for 1, to set Bridgewater a formidable target of 269 to win.

In all fairness, the bowling of the hosts was probably even better than their batting. The main bowler is the main spinner for Cheshire and he was almost as unplayable as Shane Warne at times. Oliver managed to score ten runs but lost two wickets to give him a net score of zero. Craig (+2) and Jaydon (+1) posted positive scores, whilst Alfie was the only player to worry the opposition towards the end of the innings. Alfie scored an impressive fifteen runs to take the Bridgewater score up to 238-6 and a net score of 209.

All in all, the team deserve huge credit for reaching the final and with Alfie, Oliver and Thomas all at clubs outside of school, then next year Bridgewater will be even stronger. Cricket is the ideal summer sport and joining a club is a fantastic way to develop skills quickly and to enhance social skills. However, for today, we can be very proud of our young cricketers in reaching an AJIS Final and hopefully they will continue to grow in all sports in the years ahead.