Posted on April 3, 2019 by BridgewaterPrep 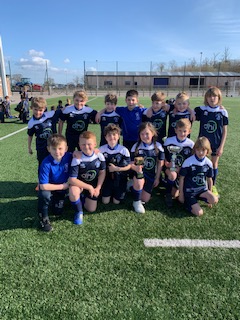 Two teams travelled up to York on Monday to compete in the U9 ISA Northern 6-a-side competition. The A team led by Alfie had genuine hopes of winning the main cup, whilst the B team captained by Molly were also going to be a tough team to beat.

In the group stages, Bridgewater A raced into the main draw with three wins out of three. The B team narrowly missed out on qualifying, but went through to the plate competition. The A team made heavy work of their first game against the hosts Queen Ethelburga B, falling behind to an early goal to shock the team into action. A late flurry of goals from Alfie ensured a 2-1 win to settle the nerves. Next up were Tower College and they were no match for a rampant Bridgewater team. Tommy Jack opened the scoring, Luca B got on the score sheet and a penalty and a terrific shot from Alfie ensured a comfortable 4-0 win. In the final group game, Scarisbrick B team were also no match for the team and another 4-0 win was the end result.  Jackson moved from defence to score two as a striker, Alfie scored again and a brilliant solo run saw Josh open his account.

Meanwhile, in group two, Bridgewater B were doing a fine job of living with the senior teams from various schools. Despite falling behind within ten seconds in the opening game to Wilmslow Prep, this did not deter the team who pressed for an equaliser. With time running out, an Anton cross was turned in at the near post by Alex to produce a well earned 1-1 draw. The host’s B team was up next and they proved to be a tough opponent for the battling Bridgewater team. Ultimately, it was only a single goal that separated the two teams and it was captain Molly who fired home to give the victory to Bridgewater.

A similar story occurred in the next game, but this time Scarisbrick A team were too strong for the valiant B team, who went down 2-0 in the end. In the final round of the group stages the B team started to show some of the form that they were to carry into the Plate competition.  Anton, Joel, Alex and Seb all scored to give Bridgewater a resounding 4-0 win over Beech House. Unfortunately, the team did not qualify for the main competition on goal difference, losing out by a solitary goal.

Into the Plate competition and Bridgewater felt they could win the trophy… and this is exactly what they went on to do!  Alex and Anton got the goals to see off Queen Ethelburga B once again but this time with a 2-0 win. Tower College were thumped 4-1 with Molly scoring and Alex hitting a superb hat trick. Scarisbrick B offered more resistance and even scored first before Joel equalised and Alex scored another two goals to secure a 3-1 win. Bridgewater went into the final game knowing a win would give them the title of ISA North Plate Champions. Player of this tournament Molly led the way brilliantly with four goals and Anton added a fifth to give Bridgewater a fabulous 5-0 win over Beech House and in doing so bringing home the trophy to Worsley.

In the main draw, the A team had to battle in every game to try and become Champions for the first time in the 6-a-side version of the event. Wilmslow Prep broke away from a Bridgewater corner to take an early lead in the first game and this visibly shocked the team. Fortunately, Alfie took charge and two quick solo dribbles led to fine finishes before Jackson sealed the 3-1 win late in the match. In the next game, neither Bridgewater nor Queen Ethelburga A team could afford to lose. Bridgewater dominated possession and created a series of chances, but it was the long ball from the opposition that continually caused problems. It was from one such long ball that the hosts took the lead, before Alfie rescued the game with a great dribble and finish from deep in his own hand.

Consequently, Bridgewater went into the final game knowing a win would see them crowned as ISA Northern Champions. If the team was nervous they hid it really well and, cheered on by neutral teams, Bridgewater dominated from start to finish. Scarisbrick A could not hold back the flood of Bridgewater attacks and the goals flowed readily. Jackson (2), Josh (2), Tommy and another goal from Alfie gave the team a resounding 6-0 win. Six games, five wins, one draw, the top scorers in the competition, conceding the least goals overall,  one player scoring in every game and playing the most attractive football of all the teams present, Bridgewater lifted the ISA North 6-a-side trophy and there can be no more worth winners on the day.

A fantastic performance by both our teams and the team will now go for a third tournament win of the year by attempting to win the ISA Cup in April. 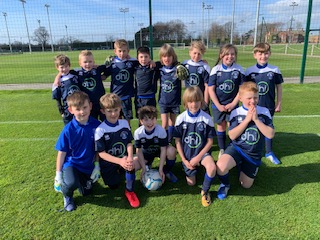 2 Responses to Regal Bridgewater Conquer All At Queen Ethelburga