Rucks, Mauls and Tries Galore as Bridgewater Scrum Down in Liverpool. 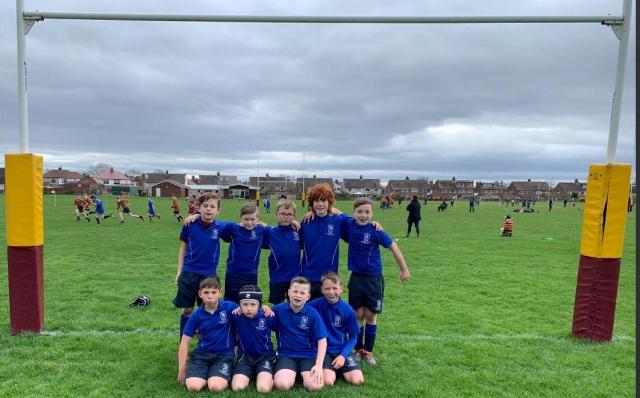 The U11 rugby team returned to action last week as they entered the Daniel Davies Tournament at St Mary’s, Crosby. It was the first time Bridgewater had entered the event and as such were placed in the emerging schools category.

In the first game, the team found it hard going against an experienced Merchant Taylor’s B team. Despite some brave tackling from Matteo in particular, the stronger opposition ran in six tries without reply. However, there was no time to lick their wounds as the team were back on the field immediately, against Manchester Grammar School.

This time the two sides were more evenly matched in terms of size, experience and ability. However, Bridgewater had learned from the first game and were much more up for the challenge. Lukee started to show his pace out on the wing and once he got into his stride he was proving impossible to stop. The strength of the Bridgewater tackles and the determination to drive forward was impressive to see and despite going down by two tries early on in the game, the team fought back gamely. With four tries from Lukee the game finished 4-4 against a formidable Manchester Grammar B team. Credit must go to Toby, Thomas and Jaydon who led the way with repeated big tackles to turn the opposition over and keep Bridgewater in the game.

In the third game, Bridgewater were brimming with confidence and took control of the game straight from the kick off. Tries rained down on the hosts St Mary’s B team, with players crossing the line almost every minute of the game. The best moment of the game was when Owen caught a high ball on his own try line before setting of on a dazzling run that took him past the half way line, before Matteo took over and dived down in the corner for a spectacular try. Further scores were added from Toby, Matteo, Lukee (twice) and Owen.

With one game to go, everybody wanted to score a try and that’s what most achieved. A fabulous 9-2 win over St Edmunds Prep did not flatter the opposition.  Led superbly by captain Owen, the team surged forward in waves that the defending team struggled to hold back. A brilliant six man move, finished by Alfie in the corner, was the pick of the tries. Other scores came from Harper, Matteo, Oliver B, Owen, Lukee(2), Toby and Thomas (2).

Overall, it was a very enjoyable and rewarding day for the team. With six of the team from Prep V, Bridgewater can look forward to further developments in the game of contact rugby in the very near future. Well done to each and every player on their performance.