Bridgewater march on in Cheshire romp

Posted on November 12, 2018 by BridgewaterPrep 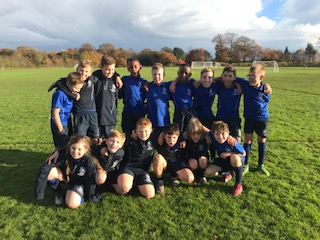 Bridgewater warmed up for the ISA Northern Cup match against Greenbank, with a trip to Cheshire to take on Cransley Prep. A combined U10 team lined up against Bridgewater’s Prep IV and V teams. With the match split into four quarters, this would allow the U9s and U10s to play as a unit in alternate quarters. 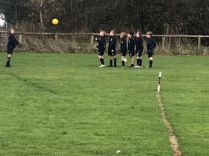 The U9s kicked the match off and gave the team the perfect start. After some neat probing football, Alfie hit a speculative shot that hit the post and rebounded in off the keeper. Moments later, Alfie added a second, before Josh turned in a neat cross from Jaydon.

Bridgewater were in total control and looking to see the first quarter out when a penalty was conceded following an unfortunate handball from Molly on the goal line. However, the subsequent penalty was blazed over the bar and the U9s handed over to the U10s 3-0 up. The change of team did not change the dominance Bridgewater were enjoying. Harper and Matteo controlled the play, switching the ball around the park with ease. Toby looked dangerous from set pieces, whilst David and Craig caused problems up front. On the odd occasion that Cransley broke forward, the pace of Thomas thwarted attacks before they reached George in the Bridgewater goal. A clever left foot finish into the bottom corner from Matteo put the team 4-0 in front at half time.

The U9s returned to action in the second half, causing the hosts even more problems. A well worked corner by Alfie and Jaydon found Josh on the edge of the area, who controlled a lovely volley to put Bridgewater 5-0 up. Toby and Molly looked increasingly comfortable at the back, whilst Luca B grew into the midfield role the longer the game went on. The team was passing the ball around and creating chance after chance. Tommy-Jack scored with a neat spin and turn from six yards out before Alfie hit the goal of the game from 30 yards out to complete his hat trick.

It was left to the U10s to finish the game and to try and keep a clean sheet. Once again Harper was dominant in defence, whilst breaking forward with pace at will. Craig and Toby both went close before David fired in from the edge of the area to give Bridgewater a well deserved 8-0 win. Both the U9s and U10s will face tougher tests this week, but if they can play with the same composure and quality as they did today, then Greenbank Prep and The Grange will know they have been in a game!