Posted on September 20, 2018 by BridgewaterPrep 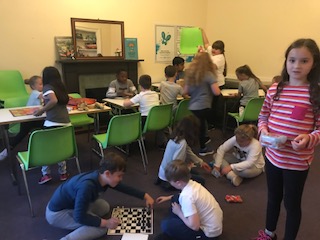 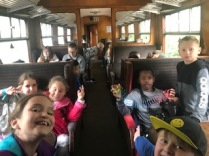 The Prep V trip to the Lake District left Bridgewater early this morning, full of excitement and expectation.  As the journey progressed further north the children were disappointed to lose Capital on the radio and had to be comforted by the sounds of Smooth FM. Fortunately, a resounding rendition of ABBA’s “Dancing Queen “ raised spirits once more.

With the journey nearing  its destination, the loudest cheer of the morning was when Miss Gill eventually caught up the lead mini- bus. On arrival in the beautiful lakeside town of Bowness, the group were greeted by the news that all boat trips were cancelled due to the impending Hurricane Ali!

Undeterred, everyone got back on board the mini- buses and headed off to Hawkshead to visit the Aquarium.  A quick toilet stop for 29 children and an hour later (?!) we were all ready for a guided tour of the Aquarium by a nervous looking Claire. Fortunately, Ollie and Lucy were on hand to help keep all in check as they captured hearts with their charm, cuteness and personality. The two resident otters swam, ate, stood on hind legs and ran playfully through endless tunnels to entertain an enthralled Prep V.

Claire went on to show us lots of fish and various species of insects and small rodents from across Asia, Europe and Africa. Pike, cat-fish and sharks swam above heads as we walked through the amazing under water glass tunnel, whilst the incredible Torbet flat fish could teach the SAS about camouflage. At the end of the tour the souvenir shop lay in wait and most of the group took the bait. We left the Aquarium armed with a selection of bracelets, key rings and colouring books, along with an array of cuddly toys, including snakes, otters, toads and most exciting of all unicorns.

After a packed lunch overlooking Lake Windermere (the largest of all the lakes at over 10 miles in length), we bid farewell to Oscars Cafe and stepped back in time. The fantastic Lakeside and Haverthewaite steam train took us on a journey through the ages to a time when the pace of life was so much more tranquil, and the steam engine was the Ferrari of transportation. At the end of the line there was an opportunity to go and hold an owl, but not too many have a hoot about that, so we took the train back and headed off back towards Bowness.

With a bit of time on our hands, the decision was taken to go to the adventure play area at Brockhole Unfortunately, the wind blew away all hopes of climbing and scrambling about, as the centre was closed. There was nothing left but to go to the Youth Hostel in Grasmere to check into our rooms. The children went to their rooms whilst Mr Altdorf and Miss Gill competed to see who could turn the bus around the tightest of spaces in under 20 turns!

After deciding who was on the top and bottom of the bunk beds and a quick unpack, we took a short walk to the local park. Some elected to go for the traditional swings and slides approach, a 5 a side football match broke out on a small pitch nearby, whilst George, Thomas and Moaed tested their frisbee skills out. Luckily, we all made use of the brilliant outdoor gym equipment, similar to that which we now have at Bridgewater, before the heavens opened and we made a hasty retreat back to the hostel in time for dinner.

Dinner was served at 6pm and helped to warm everyone back up. The potatoes dressed for the occasion by putting on jackets, whilst Prep V had to be talked out of putting their PJ’s on. With the tv not working in the lounge, we all gathered to settle down to play a variety of games. Pictionary, Jenga, Chess, UNO, Connect 4 or just playing with unicorns and owl puppets occupied the group before showers and bed was called.

At 9-15pm lights were out and thoughts turned to the next day and tree top treks. Goodnight all and remember… before you go looking for unicorns, you must first find the horses!