Queen Ethelburgas fall to the Kings of Bridgewater 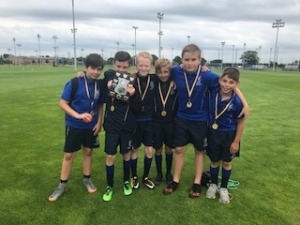 At the ISA Kwik Cricket Tournament in York on Friday, one of the great sporting cliches came home to roost. It is often said that “catches wins matches “ in cricket, yet it is still an area that is often neglected as everybody wants to focus on bowling and batting. In becoming the ISA North Cricket Champions for 2018, the Bridgewater team demonstrated the importance of great fielding throughout the day.

It is also rare to see every player in a team game play such a big role in an event. However, each player had a moment to remember and were pivotal in the tournament victory. In the opening game Bridgewater took on Tower College from Liverpool. The opposition actually out scored Bridgewater with a challenging 48 runs. However, the bowling from Thomas, Alfie, Archie and Daniel was so good that wickets tumbled regularly. Matteo picked off two of the 7 wickets to fall, meaning a net total of 13 runs was needed for the win.

Alfie and Archie top scored in the reply from Bridgewater, with Thomas and Oliver also chipping in with vital runs. The Tower bowlers could not dent the resolve of the boys and an easy 31 run ensued, thanks to the loss of no wickets and a total of 44 runs scored.

In game 2, Highfield Prep were put into bat and the bowling and fielding was even better from Bridgewater. Archie delivered six bowls and took 3 wickets for no runs. Ethan(2), Daniel(2), Matteo, Oliver and Alfie took wickets and two brilliant run outs from Matteo and Ethan meant Highfield lost 9 wickets for just 36 runs. This set a target of a net score of -9 to win, which was achieved with ease. Once again, Archie and Alfie top the batting averages and a 51 run win, guaranteed Bridgewater a place in the semi-finals.

Before that, the final group match against hosts and hot favourites Queen Ethelburgas needed to be played to see who would top the group. Bridgewater were put into bat and struggled against an impressive set of bowlers. With a total score of 29 scored and two wickets lost, the hosts needed 19 to win. The batting from Queen Ethelburgas, which contained an opening batsman from the Yorkshire Academy, was dominant. Ethan, Harvey and Matteo(2) took wickets, but this could not prevent the hosts from sealing a comfortable 28 run win, having scored a daunting 67 runs in their 8 overs.

In the semi-finals, Huddersfield Grammar were the team standing in the way of Bridgewater reaching the final. Once again, it was to be the fielding that was to give the team the edge in what was, on paper, a game Bridgewater should lose. Two excellent run outs by Ethan and Alfie and an absolute stunner of a catch from Harvey, gave the bowlers encouragement. Thomas, Alfie, Matteo and Ethan (2) restricted Huddersfield Grammar to 37 runs, but with 5 wickets lost, the total to reach the final was 13 runs. Thomas, Harvey, Oliver and Archie found scoring easier going this time around.  With 45 runs scored and for the loss of just two wickets, a 23 run victory put Bridgewater deservedly into the final of the main competition.

Queen Ethelburgas were put into bat and despite some tight bowling and sharp fielding, a total of 60 runs was scored. However, what was to prove to be a crucial moment took place early in the hosts innings. Quick thinking from Oliver, as he fielded a shot and dived to run out the opening batsman and take a vital wicket. This reduced the chasing target to 55 runs, a total that Bridgewater had not gotten near to during the competition.

The tactic was simple, throw caution to the wind and go for it! The opening pair of brothers Archie and Thomas did just that and gave the team an incredible start. The boys’ opening stand of 28 runs, with Archie swinging away to 18 runs in 6 balls, gave hope to Bridgewater. Oliver and Alfie kept the scoreboard moving, whilst Daniel and Matteo safely took the team up to 50 runs without loss. With two overs to go, Harvey and Ethan went into bat, knowing they could not afford to lose a wicket or the match was gone, whilst somehow they had to find the runs needed for an unlikely victory.

The pair survived a fierce over to go into the final over of the tournament with the scores level. Ethan scrambled a single to take the lead, but a wicket would end all hopes of victory. It was down to Harvey to hold his nerve and keep his wicket intact. Incredibly, not only did he survive, but a flashing drive to the boundary gave Bridgewater an unbelievable 5 run win, having scored their highest score of the day and not losing a wicket.

The team became history makers as this is the first time Bridgewater have won the ISA cricket competition. It was a brilliant day and a magnificent team performance. Archie top scored with 48 runs, followed by Alfie (20)and Harvey on 14 runs. However, it was the fielding and bowing that was significant and created the opportunity to win the event. Matteo and Ethan took the most wickets with six each. Thomas, Alfie and Archie were the most economical bowlers with Archie’s figures of 5-1-11-3 very impressive. Catches and run outs from Daniel, Harvey and Oliver all contributed to an all round display of cricketing prowess by a team that has evolved at pace over the summer. Well done to the boys and congratulations on becoming the ISA North Cricket Champions for 2018.