Posted on December 13, 2017 by BridgewaterPrep 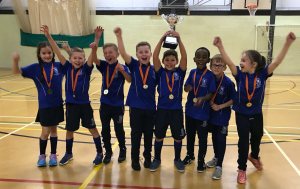 Prep 4 completed a brilliant term’s work by taking the Premier Sports Dodge ball Tournament this evening at Bridgewater School.  The talented youngsters are now unbeaten in all competitions so far in 2017 and are Tag Rugby Champions as well as MCFC Football Tournament winners.

The team had to come through a tough round robin league format to reach the final against group runners-up Moorside. Prep 4 went into the final having dodged, dipped, ducked and dived past every opponent, to win an impressive 7 out of 7 games.

First up for both Prep 3 and 4 was a clash against each other! Despite some great blocking work by Alfie, the older team were too strong and won with a “wipe out “ in double quick time. Prep 3 will gain much from the experience and but for some tactical errors and over enthusiasm, their results may well have been very different. In the following games, Prep 3 held the lead over North Walkden, Walkden and Wardley and perhaps should have held on for victory. Sebastian, Luca and Joel went out on all out attacks, whilst Molly and Jasmine focused on defending for the team. A more defensive approach at key moments  would certainly of brought victories against each of these opponents.

In their final games, the team started to understand how to defend their lead as they ran out winners over Grovenor Road.  Despite some heroic last man standing play by Joel, Prep 3 ended up being “wiped out” one last time by Moorside.

Meanwhile, Prep 4 went from strength to strength, as the opposing teams found it harder and harder to dodge the constant attacks from Matteo, Harper and Thomas in particular. The only team that achieved a “wipe out “ in every game played, was Bridgewater Prep 4- a very impressive achievement at any level of sport. Anya, Allegra and David played with intelligence and tactical awareness, supporting the more attaching players perfectly. Alfie and Jaydon were also instrumental in picking off opposing players at vital moments in key matches in the tournament.

Prep 4 went through each team quickly and calmly, beating North Walkden, Moorside, Walkden, Grovenor Road and Wardley. Matteo had the aim of an expert sniper, Harper made catch after catch, Jaydon picked off opponents at will, whilst Alfie, Anya, David and Thomas gave nobody a moment’s rest on the other side of the court.

Despite such a dominant performance in the group stage, nerves were still abound as Bridgewater lined up against Moorside in the final. The opening minutes of the game were an even battle, but as the game wore on, the superior skill, determination and tactical play of the Prep 4 team was too much to stop.

Both Prep 3 and 4 can be justifiably proud of their individual and team performances on the night. As Matteo lifted the trophy aloft for Bridgewater, everyone could go home feeling happy about another job well done!