Posted on October 17, 2017 by BridgewaterPrep

Bridgewater played host this evening to the first Premier Sports Tournament of the 2017-18 season and it proved to be an exciting night for all participating teams. 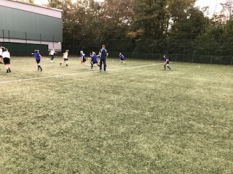 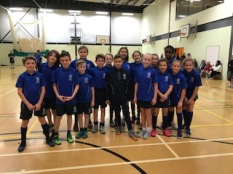 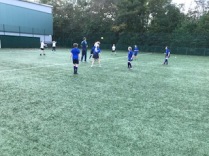 Despite only a couple of sessions training due to a hectic football season so far, Bridgewater fielded two very competitive teams who can be proud of their individual and collective performances.  Bridgewater A started the event off with a game against St Johns and went down to an early goal from the tip off. However, the team quickly re- grouped and thanks to some great finishing from Daniel (2), Jess and Archie ran out comfortable 4-1 winners.

Next up for Bridgewater A was Bridgewater B !!! Neither team wanted to lose but in a closely fought contest it was goals from Daniel L(2)and Matthew H that gave the A team a 3-0 win.  Both Bridgewater teams then had to take turns to play against the reigning champions Moorside. Despite  some resilient defending from Jake, Ellen, Eva and Isabella, both teams succumbed to their more experienced opponents.

Bridgewater B took on North Walkden next and battled bravely to a 3-1 defeat. Oliver B scored a consolation goal, whilst Oliver A made some important saves in the Bridgewater net.

With semi final qualifications hanging in the balance both teams went into the final games knowing only a win would put them in the semi finals. Bridgewater B stunned St Johns with a fantastic performance with Freya, Juretha and Dalia all playing to their best. However, it was a stunning hat-trick from Harvey that sealed a spot in the final stages of the tournament. Meanwhile, Bridgewater A went down to an early goal against North Walkden and had Ethan C in goal to thank for staying in touch in the match.  Thankfully, the determination of the youngsters to get through gave them renewed energy and goals from Matthew (2) and Daniel (2) saw the team to a 4-2 win.

North Walkden were the opponents again in the semi final but this time the game was not so close.   A Matthew H hat trick eased the team into the final against Moorside. Bridgewater B gave there all against the cup holders in their semi final, but only had an Oliver B goal to show for their valiant efforts.

So to the final…. once again Moorside were to prove too strong for the inexperienced Bridgewater side. The score line of 6-2 did not tell the real story of the game and we can be delighted with the chances created and the progress made throughout the tournament.

Overall, it was a fabulous night of sport. Collective and individual achievements were made and runners up in the first tournament of the season gives us plenty to build on. Ethan C deserves a special mention as he was voted Player of the Tournament by coaches and teachers at the event.

Finally, a special thanks must go to the supporters and to two parents in particular who stepped in to provide valuable support to ensure Bridgewater B reached the semi final stages. Next up on the sporting calendar is the Salford Cross Country Championships on 4th November  for Prep 3,4,5 and 6. Have a great half term and we hope to see you all at the cross country.